The beginning….  Josephine, the German Shepherd who made me a dog trainer was a great Therapy Dog but never got a title.  NOT THAT I DIDN’T TRY!  I believe I won the award for the most failures on one dog while trying to get her Schutzhund BH.  She always found a new and exciting (to her) way to humble me whether it was running off the field to greet the spectators or simply playing catch me if you can.  In hindsight, HAD she been an easy dog to train I most likely would not be a dog trainer today.  She did pass the Canine Good Citizen Test but certainly not on the first attempt! 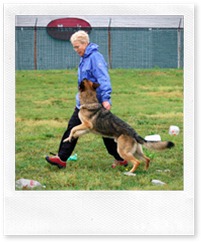 The first title I put on a dog was a BH in Schutzhund and it was Olivia who started it in 2003.  Ari soon followed after, as did Teddy and then Kobie with BHs.  This was the generation of dogs who taught me lesson after lesson. They all were Therapy Dogs and received their Canine Good Citizen certificate.  Ari was a bit of a butthead (mostly decoys called him that) and we repeated the BH and achieved a Tracking 1 title in Schutzhund.

While I was struggling 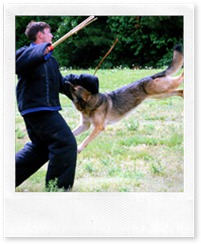 with Ari, I took my 3 Amigos (as I called Teddy, Kobie and Olivia) on the road.  They each got a AKC Companion Dog title and Olivia went on to get an AKC Companion Dog Excellent title. They also got a UKC Companion Dog title and again Olivia went on to get a UKC Companion Dog Excellent title.  At the same time they each got an AKC Rally Novice title.  These 11 titles each required 3 legs (that’s a total of 21!) and we did them in a four month period in 2004.  In addition, Olivia and Kobie each received a Herding Instinct Certificate.  Teddy turned out to be a sheep chaser and I never gave Ari a chance to meet the wooly whites. 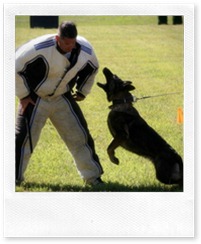 assed – woohoo!  For the NY trials I took Olivia along with us and entered her both days for a TC which is the obedience part of the PSA 1 title and each day she was the high score of all the dogs that were entered (60 over 2 days)!  By the way, this was in the days when at a PSA trial maybe 15% of the entries actually passed.

Over the winter of 2005-06, Ari and I trained and trained and in June of 2006, we traveled to Baltimore to compete.  Finally, not only did we achieved the PSA 1 title but also took FIRST place!  For the rest of the summer, we “played” in Level 2, passing the obedience portion but never achieving the title because Ari never really “got” the “call-off” scenario!  Late in 2006, Ari competed in his first AKC trial getting his Rally Novice title with excellent scores and he also passed 2 legs of a CD. 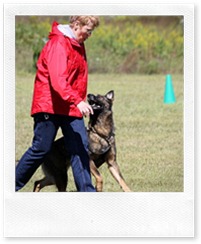 7, Ari was diagnosed with Addison’s Disease almost losing his life before AD was diagnosed.  After a few months of recovery it became apparent that he couldn’t compete so we did one last trial in Bourbonnais, IL in PSA Level 2 on 07-07-07 which was a fitting day to retire.

Tori was another dog I had at the time and she simply did NOT like obedience but she was an excellent Therapy Dog and passed the CGC test with ease.  Then in 2006, I placed her as a Psychiatric Service Dog – not bad for a dog adopted from a rescue at one year old who thought she was a princess!

2007. Enter Brita.  Before she was a year old she had not only a HIC but also an Herding Tested title.  In a few months time she achieved her Rally Novice, Rally Advanced and then Rally Excellent titles and passed the CGC test and became a Therapy Dog.   Next was a BH, an AD which is an endurance test, then a Schutzhund TR1 and a Tracking 1 from Service Dogs of America (SDA).  She also achieved the Watch Dog (WH) and Rescue Suitability (RH) titles in Schutzhund and then in 2010 rounded it out with a PSA-TC in Illinois after an unsuccessful attempt at a PSA-PDC in St. Louis.

And then there is Jake…. who squeaked by the Canine Good Citizen test to get the certificate and now is probably doing something way more important than any title and that is becoming a Service Dog.

So there you have it.  Will I continue to train and trial Brita and Jake?  Train – yes…  trial…  we’ll see… It may be a situation of “been there, done that” and I’ll go on to other things… as I said, we’ll see..  Whatever happens…  it HAS been a good ride!