What Ari has to Say.

Conversations with Marilyn concerning his health.


….Whole back end wobbly not losing use of only one leg but actually a leg and a half. Right leg can’t support and he can’t compensate. When he shifts his weight he falls over.
…. No headaches but dizziness.
…. Is your time up? He won’t answer it because he doesn’t want to think about it. He's in denial. He knows he’s not making it easier for me or him. He likes being a dog and doing things with me and sometimes being a clown. He’s been with me many times before… cliffs, centuries ago, involved once, dogs together (street dogs). What can I do? Love him and hold him.
….Stomach bloated but dry mouth which is why he drinks so much water. He feels kind of spacey or tipsy. He sees his mental capacities leaving but not dementia. Something physical pressing … most likely brain tumor.
…. He hates putting me through this and he wonders how I’ll ever survive without him to keep the girls in line. Loves me and hates the way he has to pee. (squatting)
…. Not long… 0-6 weeks. Very hard to say…


· Ari vomits in the back yard in the corner and doesn’t want to tell me.
· He’s trying to be strong and he’s not the dog he used to be and it’s sad.


Olivia’s report (into herself)


· Knows nothing she is so itchy. Give her drugs.(she says). it’s maddening…


· She knows that he’s not long for this world. Animals die. (Not rude but a reflective statement)
· Nothing she can do so she’s accepting it.· She’s sad that I’m sad and everything is heavy around here now.


· He’s (Teddy) everywhere….everything’s fine….comfortable…at ease…· Fine with his resting place
· Ari’s coming soon but that’s ok since everyone gets along – they were together before.
· He’s watching all of us and he’s everywhere. 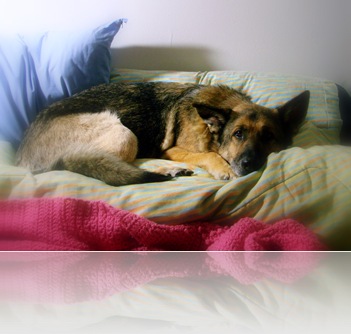