…I couldn’t make these things up….

One evening in a very short span of time Jake broke out of Brita's crate in the van after eating and came to the front door to come in...just walked up on the porch and sat in front of the door as if it was the normal thing to do.

He then walked into the kitchen and helped himself to a carton of 18 eggs which I gently took away from him as he trotted by me to settle in the living room.  He gave them up with no problem and again went into the kitchen and took a tomato from the counter which he proceeded to bury in the couch.

One day I was taking a shower after working in the yard and I turned the shower on and went to get clean clothes.  When I returned Jake was in the shower trying to catch the water.  I turned the water off by turning the faucet to a horizontal position to the right and he looked and me, looked at the faucet, looked back at me and then put his nose under it and lifted it up to start the water running again!  Yep, I was laughing!  I need to set that up with a video camera!

And now, when I go to the bathroom, he comes in, hops in the tub and flops down behind the shower curtain where he stays until he hears the toilet flush.

And then there was the foam from the dog bed in Olivia’s crate…. 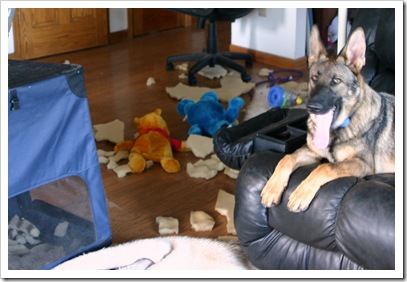 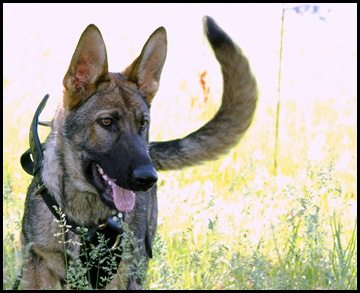