I believe I was visited a few years ago by the spirits of the dogs in the cover photo to help me write this poem because I certainly couldn't have done it by myself.

‘Twas the night before Christmas, when all through the house
Jake and Brita were searching for not just a mouse.
Their stockings were hung by the fridge with care,
In hopes that mom Laurel would willingly share.

In just a short time they were snug in their beds,
While visions of chipmunks danced in their heads.
It wasn't just chipmunks they dreamed of that night,
But also the rabbits who they made take flight.

In a short time there arose such a clatter
They jumped from the couch to see what was the matter.
And there to their wondering eyes did appear
The spirits of others that used to live here.

First, there was Josie who made the most noise,
Chasing the others, especially the boys.
But Ari and Teddy would not let her run
Because they decided she'd stifle their fun.

Tori was circling to see what to do
When Kobie and Liver quickly ran through.
Then they ALL came together to join in a song
While Brita and Jake, wide eyed, looked on.

The message they brought on that night of a birth
Was of PEACE and GOOD WILL to all on the earth.
This message was clear to those who would listen,
As clear as the snow which often would glisten.

And then, in the distance, was the sound of a whistle
And away they all flew like the down of a thistle.
But they were heard to exclaim as they flew out of sight,
"Peace to all of God's creatures, and to all a good-night!"

Some you never forget…

Also in these photos is Brita when 2 years old and Ari was 8.

Recycled a photo from a few years ago!!

A Walk in the Yard

Jake digging in the woods 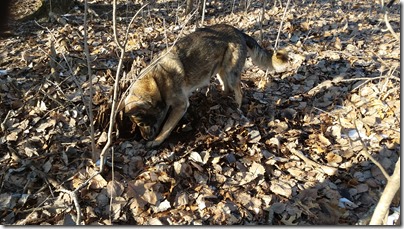 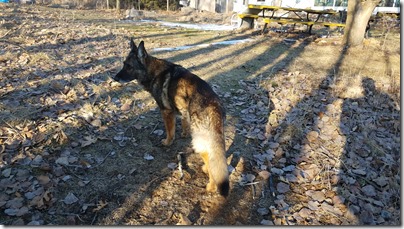 Jake and Brita - 7 years ago today Facebook tells me!! Check out that tail! He was 3 months old!