There were so many well wishers I’m going to reprint them on a separate page.  Click here to go to that page.

Who knew it was broken?? 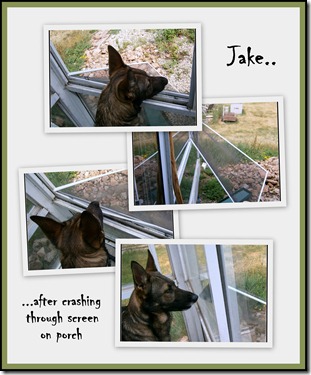 Brita seems to be doing well..  slept all night – no whining – I’m sure the drugs helped!  So it was pretty uneventful until a bit ago when I took her out front to potty.  The temporary fence I put around the front yard for Olivia is coming in handy.  I do keep Brita on leash however since a rabbit lives right around there and my guess is that she would go from standing still to mach 1 if she saw it!  Jake was not happy that he had to stay on the back porch while I took her out front and Jake, being Jake, never thinks he can’t do something but instead just figures out a way to do it.  I can’t tell you whether the screen was loose or not but I assure you it’s now out of the window and he was at the front door to greet us as we tried to push our way in.  I will say that a solid “platz” or “down” has calmed down my dogs on more than one occasion including this one.  So he stayed down while I threw the wiggly “why can’t I say hi” Brita into her temporary padded room.  All is well now.. the K9s are sleeping.  More later.

Uneventful day (a good thing!) … Nothing new to report.  I realized how different than the other 3 dogs who had surgery over the years (Jake, Josephine and Teddy).  For each of them it was a hip issue and walking was a problem unlike Brita who is walking just fine but shouldn’t.  I notice she doesn’t have full control of her tail which will come but other than that, the challenge is slowing her down.

So I thought when I took these pictures that she seemed ok – note happy look..   well…  she does NOT like the cone and she even more so does NOT like being confined!!  Right now (later in the evening) she has just finished a bout of whining and she is lying close to the edge of the pen with Jake right on the other side!

Oohhh..  let’s see….  how many weeks until she can run and jump again…. 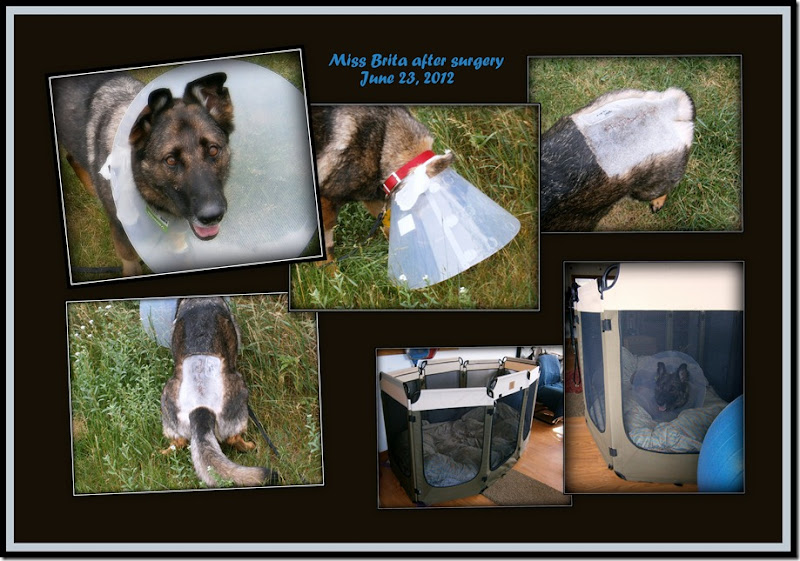 ….where will it take her?  …..how did it start?  …what are we talking about…  Degenerative Lumbosacral Stenosis or Lumbosacral Instability…. 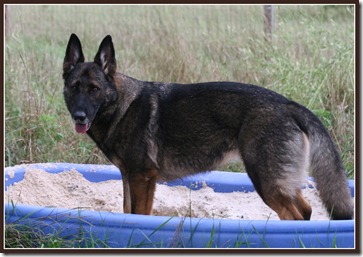 happening.  Then on May 13th, my birthday and mother’s day, she was lying in the living room not far from me, started getting up and it was more than a yelp.  The next day, off to an appointment with Dr. Jeff at Great Lakes Vet.  X-rays detected arthritis and a narrowing of the hole where the spinal column and nerves go through.  In the information in the next post, it mentions that dogs with hip dysplasia (hers are great, by the way) will show a mild response to hip extension whereas dogs with lumbosacral disease will object more acutely as this manipulation causes an “exquisite pain response”.  I guess that’s why she did what she was taught to do when someone is hurting her and that is to fight back.  After I said “get me a muzzle” the vet said “ I think we’ll need to sedate her for x-rays”… I said:  ya think?

First there were pain meds for a week and a VOM treatment and she seemed a bit better.  Pain meds were fazed out, antibiotics were started and there were just small yelps, then another VOM treatment.  Small yelps and then none for a few days until last night when I invited her onto my bed where she likes to sleep.  She hesitated, then tried and fell back with more than a small yelp but not quite a scream.  She didn’t try again.

What does all this mean?  Where will it lead us?  I don’t know.  In studies, German Shepherd Dogs were “over-represented” with numbers ranging from 25-50%.  I bought health insurance for her – I guess I’ll see now if this is covered.  From what I read, surgery early on is way more successful than waiting until the condition has worsened.  More to follow…

May 30, 2012 – Appointment with Bruce VanEnkevort - DVM, Diplomate ACVS, General, Orthopedic and Neurosurgery of the Fox Valley Animal Referral Center.  He agreed with Dr. Jeff and also indicated that the next step is to do an MRI to determine the extent of the problem. Dr. Bruce detailed the costs involved of the MRI and possible subsequent surgery and I submitted it to Brita’s insurance company for pre-authorization.

June 6, 2012 – The insurance company authorized the procedure and an MRI (at Theda Clark Regional Medical Center) was scheduled for June 12th.

June 12th – the MRI confirmed what was on the x-rays and surgery is scheduled for June 22nd.  Brita gives a yelp often when she gets up but her wonderful attitude about life never changes…  you gotta love dogs.  I would probably be doing a bit of whining by this time if it was me!  Her leg muscles are clearly deteriorating and I’ve watched her use her front end to pull herself up (while jumping in the van, for instance).

June 16th – Took her swimming at Radfords pond and clearly noticed how after pulling herself out a few times (and it’s shallow) she wasn’t too enthused about going back in. She also doesn’t want me to pet her back legs.

Tomorrow Brita will undergo back surgery for lumbosacral stenosis. Please send good thoughts her way. She's 5 1/2 and deserves to be able to move again without pain - simply jumping into the side of my van has almost too much for her recently. 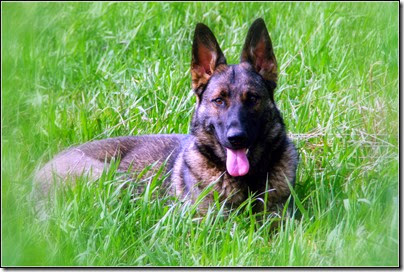