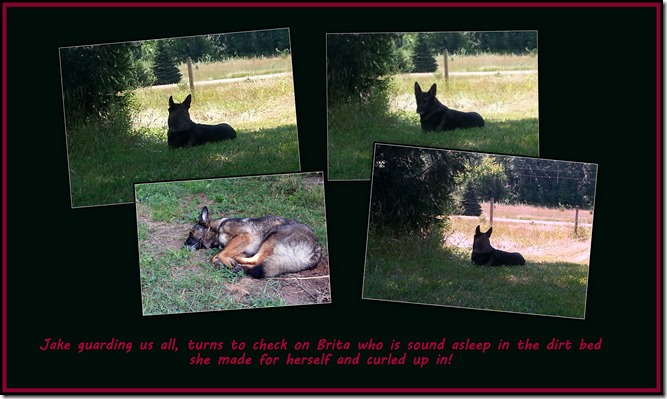 I tell ‘em…  “get that rabbit” because rabbits are eating my stuff!  Remember those carrots I planted…. 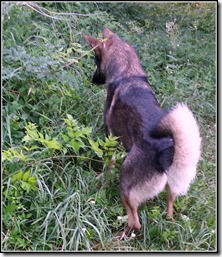 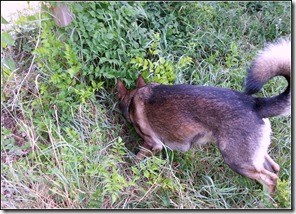 …sometimes I really don’t want to be right…. 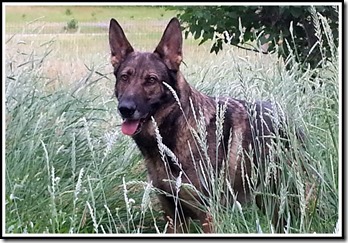 “Tell me it’s NOT Pannus” …I said to the vet.  “You have a good eye for it”, he said:  “Most people would not have recognized it this early in it’s progression”.  “This is my 3rd dog with Pannus”  I added and his response was “well, you do have the right breed for it.”

Three months ago I noticed Jake’s eyes, took a picture of them and emailed them to Dr. Jeff.  He recommended that I observe him and if I feel like I should do so, to bring him in to have his eyes checked.  So, today, I did that.

He’s not happy about having drops put in his eyes but since it will be his life now, I’m sure it will get to be just another thing to do each day.

Pannus is a disease seen most commonly in the German Shepherds, but does occur in other breeds. A progressive change occurs where blood vessels and scar tissue invade the cornea. This change usually begins in the outer or lower quadrant of the cornea, and severe cases can involve most or all of the corneal surface area resulting in blindness. If chronic, the affected areas may become black with pigmentation.

It is believed that Pannus is an immune mediated disease. That is, some subcellular change has occurred in the cornea which the immune system then recognizes as abnormal resulting in an immune mediated attack in the cornea almost as if the cornea was foreign or transplanted tissue. It is suspected that the German Shepherd has a genetic predisposition to this disease, but the damage to the cornea which starts everything is thought to be associated with ultraviolet radiation.  Today, Pannus is diagnosed worldwide, however it is well recognized that cases of Pannus are more severe and harder to treat in areas of higher elevation, supporting the UV radiation theory. It is hypothesized that dissipation of the ozone layer has resulted in greater exposure to ultraviolet radiation.

It makes sense then to treat Pannus with medications that locally suppress the immune reaction. Steroids (such as dexamethasone and Prednisolone) are anti-inflammatory medications, which provide some immunosupression as a side effect. Cyclosporine, is a drug which has immunosupression as it’s primary mode of action, and applied topically alone or in combination with steroids often results in better control of Pannus than the use of steroid alone.  Cyclosporine (1%) is used in the treatment of Pannus. With treatment, the active formation of blood vessels and new tissue often resolves, but the scarring and pigmentation may improve slowly or not at all.

Reduction of exposure to ultraviolet radiation is also helpful in the long term control of Pannus. Keeping the dog indoor during the sunniest part of the day; providing a doghouse shelter; or trying a specialty pair of canine sunglasses called Doggles may prove very helpful.

Since Pannus is an immune mediated disease, it is managed by treatment but not cured. Ongoing treatment for life is needed to maintain vision.