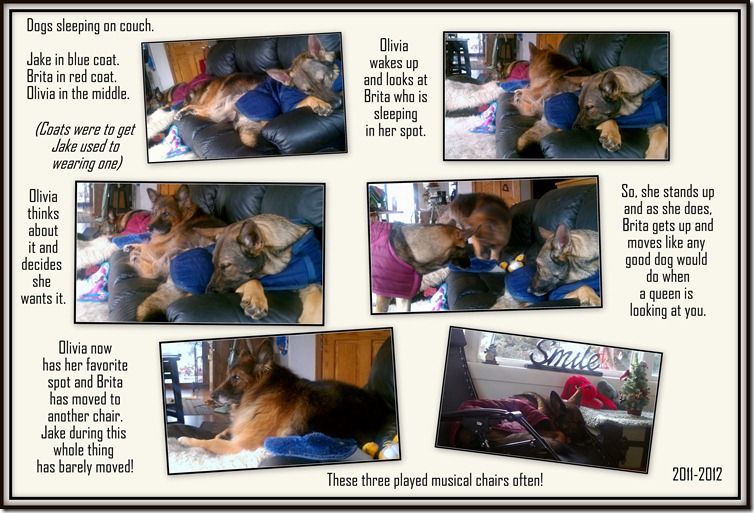 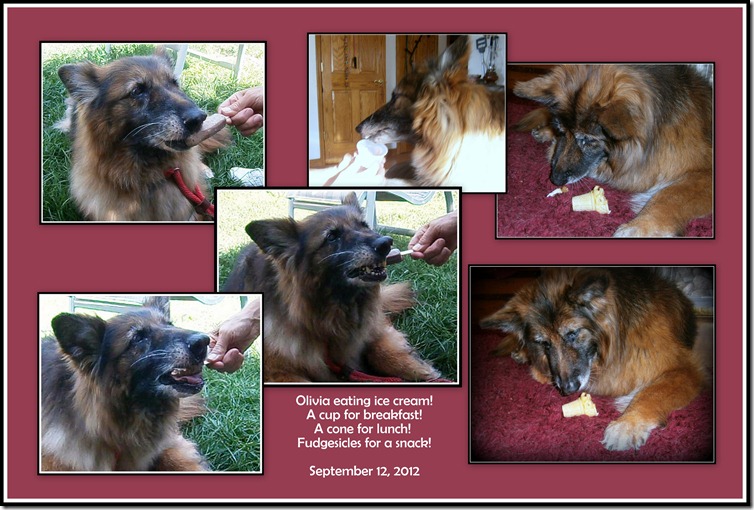 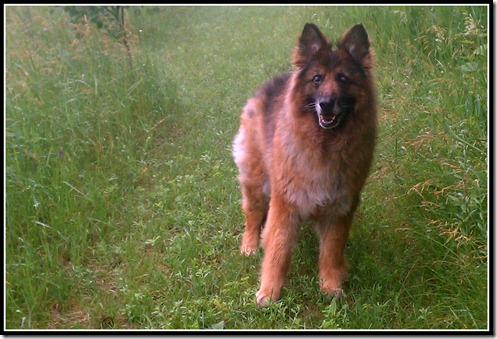 Sweet Olivia... it had to happen eventually... almost blind and almost deaf, she was an inspiration to those who knew her. She brought a sense of calmness to my house with her ever positive attitude. Even when a stroke took away her ability to walk and to think clearly, she always seemed to have a smile on her face when she was comfortably positioned on the couch. The signs were clearly there but it became instantly obvious to me yesterday (Tuesday 9/11/12) when I returned home that last night would be her final night. She is now with Ari, Teddy and Kobie who I'm sure were there to help her along in her journey. It truly is the end of a generation of dogs who chose to call my house home.

To my Sweet Olivia… 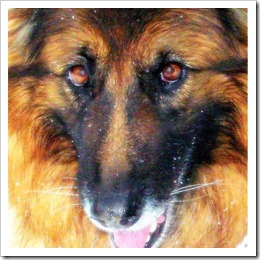 I know not what your life was like before you came to me
But this I know and it’s a fact that it was meant to be.

I knew before I met you that you were surely mine
And when you came to greet me, I knew it was the time.

The time for me to take you home and teach you how to play,
The time for you to work out what was getting in your way.

You trembled as I trained you and shook when we would play
But soon you channeled all of that and even learned to stay.

We took some tests and, sure enough, put letters by your name
They made no sense to you, I know, but showed you played the game. 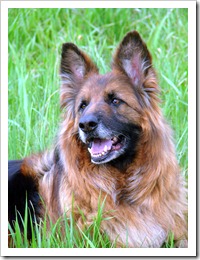 When we would go to take the tests the people’s heads would turn
To see the beauty in your coat and in your heart they’d learn.

You tried your hand at many things but herding, it was fun
To get those sheep to go each way and always on the run.

You loved it in the spotlight and people sure loved you
And when you did your demos they loved you through and through.

We traveled cross the country, several times if you recall
But the test we liked the most, was when you were best of all.

So as you aged you always were the beauty of the pack
And you were special in my heart, so just remember that. 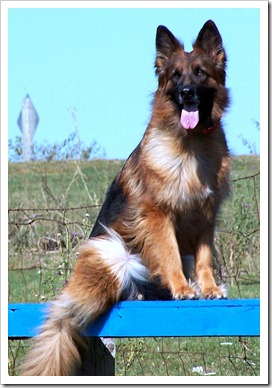 As time went on your legs got stiff and it began to show
That your time was winding down and you were getting slow.

The guys that left before you were the leaders of your pack
And I know you surely missed them and wished that they were back.

Your best friend was still around and always by your side
And when your sight got very dim, Miss Kobie was your guide.

And then, like that, she left you too, in a most traumatic way
So you became the one in charge to calm the rest who stay.

At first you seemed reluctant to be the leader of the rest
But in time you showed us all that you could pass the test.

We went for walks just you and I and you could barely hear
But even so from all these walks are memories I hold near.

You loved to play and have some fun and people came to see
The little girl with attitude who never said “poor me”.

You were a model for us all ...a leader you became 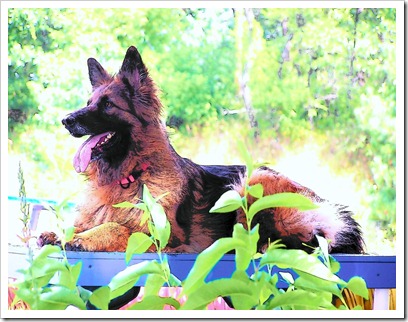 And even though it was so hard, it wasn’t just a game.

I know you’re safe with your two guys who crossed a bit ago
And they I’m sure were waiting there to show you where to go.

Your generation now is gone, you were the last, you see,
It was a ride I’ll never forget as long as time shall be.

And so my Sweet Olivia, I hold you in my heart
Because I knew that you were mine, for sure, right from the start. 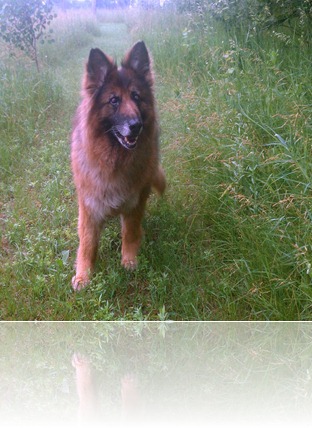 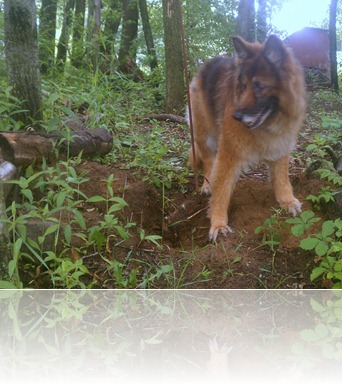 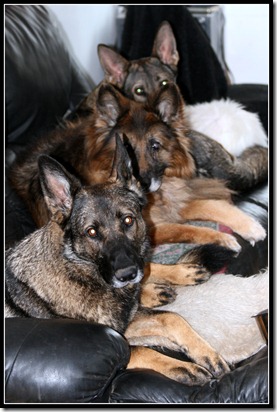 There have been signs over the last few weeks.  Walking in to walls and heading in the wrong direction.  Because Olivia couldn’t see well, she knew the house in her head….  how many steps from the grass in the front to the steps where she had to raise her leg – where and how long the ramp to go down to the yard was – how to find mom at her computer to get attention.   It was different now.  Very disconnected but them sometimes she seemed fine.  Until yesterday. I returned home from work and she was stumbling and could barely walk.  I got her outside and then she couldn’t find her way back to her couch.  When I got her there she couldn’t get up the step to it.  I suspected then that her time was running out.

I spent the night with her on the couch hoping in the morning she would be better.  She wasn’t.  There were times when she was sitting that she looked just fine – but she was sitting and not moving.  I made a vet appointment for the afternoon and said goodbye to her then.  My friends and I laid her to rest next to Kobie on the hill in the woods – right near her guys, Teddy and Ari.

This is the short version…  maybe I’ll add more later…  We miss her already…. she was such a huge part of the dynamics of the house that it will take time to adjust.

It truly is amazing the power that this crazy thing called Facebook has….  I’ve experienced it before and it never ceases to amaze me how supportive Facebook friends, many of whom were real friends before Facebook) can be.  I posted about Olivia before going to bed and within 30 minutes over 20 people has responded.  Now it’s morning – 7:30 am – and I am looking at 20 likes and 43 comments….. overwhelming….

So here it is…  what I posted with a new cover photo….

Sweet Olivia... it had to happen eventually... almost blind and almost deaf, she was an inspiration to those who knew her. She brought a sense of calmness to my house with her ever positive attitude. Even when a stroke took away her ability to walk and to think clearly, she always seemed to have a smile on her face when she was comfortably positioned on the couch. The signs were clearly there but it became instantly obvious to me yesterday when I returned home that last night would be her final night. She is now with Ari, Teddy and Kobie who I'm sure were there to help her along in her journey. It truly is the end of a generation of dogs who chose to call my house home. RIP Sweet Olivia....

Click here to read the support from people – some who I really don’t know except for on facebook.  …but not before you’re read the next 2 posts.. 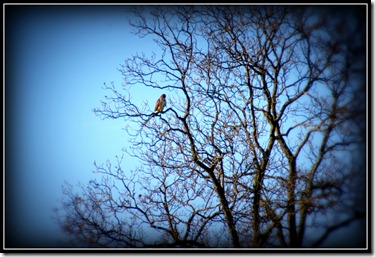 I don’t see a hawk every day… or every other day…  sometimes I don’t see one for weeks at a time.    I remember the first time I really took notice.  Teddy and I were out front of the house.  I was working in the garage and he was snoozing in the front yard.  He was not doing well and I was worried about him.  Then all of a sudden I heard a commotion and a hawk swooped down I swear not 20 feet above the ground and then flew up and over the pine trees.  I thought at that time it was unusual and that the hawk was trying to tell me something.

Since then I’ve seen many hawks – sometimes not for weeks at a time but then just when I feel I need affirmation about something – there it is..  a hawk telling me I made the right decision and everything will be ok.  At one point I researched the symbolism of the hawk and this kind of summarizes what I found.

The hawk is a messenger bird.  Usually when we see a hawk it means to pay attention because a message is coming. Hawks represent clear sightedness.  They bring courage, wisdom, illumination, creativity and truth and give us the ability to see the larger picture in life. They can help to overcome problems and make wise use of opportunities.  This is the hawk’s 'medicine'.   When the same animal keeps coming to us in real life or in a dream, it is bringing it's medicine to you.   The hawk brings a message, a good one, to let us know you are on the right path and whatever problems we are wrestling with we will solve because hawks medicine has been given to you.

Yesterday, after laying Olivia to rest we walked to the house and were chatting in the driveway and a large bird swooped by and went behind some large trees…  you guessed it…  Hawk was bringing me a message that everything would be ok….

I’ve written about hawks before. They speak to me… tell me when I’m on the right path…. If I wonder if I’m making a good decision or heading the right way, a hawk will fly over and I’ll feel good about it! Doesn’t matter if I’m on the road, at home in the house or in the yard.

Anyway, yesterday I was driving to work and merging onto Highway 41 from County Road II. I saw a hawk to the right who had been sitting in a tree but was taking off. He flew up just a little, swerved to the left coming in front of me and then continued to the left. As I watched I was watching the highway. I knew I had a separate lane to get onto the highway but as I turned my gaze to the left I saw a truck (someone late for work maybe?) speeding up beside me as I was merging… Had I not watched the hawk I most likely would not have seen the truck that was in my blind spot.

Hmmm… thanks Hawk for pointing that out to me!