There’s a squirrel in my basement!!

I was taking a load of laundry downstairs before bed and got halfway down and saw it!  Flat on it’s back… dead as dead can be!  Little arms and legs out to the side…  I immediately turned around and came back upstairs.

“OK you guys,”  I said to the dogs..  “whoever brought this squirrel in is going to take it back out.” I shoved Brita and Jake (it was one of them and my money would be on Jake) to the landing at the top of the stairs and shut the door so they could go nowhere but downstairs.  I have another stairway through an unfinished part of the lower level that goes up to the garage and there is a dog door for them to go out to the fenced yard.

Yes, they are spoiled – 3 acres fenced in various sections and maybe an acre of woods in parts of it.  Certainly lots of trees for squirrels but I rarely see any.  Most are smart enough to stay away.  Not many rabbits either.  Someone posed the question – do they eat them or just take them out and bury them.  Well the answer is – it depends.  It depends on what dog it is.  Josephine would catch rabbits and eat them right in front of me or anyone else.  I remember she did that one time when I had her along at work.  She caught it and ran back to her crate to enjoy her catch.  Ari just watched.  He was a puppy then.  Then one time when Ari was a few years old he, with pride, brought me a rabbit freshly caught and not a mark on it and dropped it at my feet.  Before either of us knew what happened, Josephine swooped by, grabbing it as she went and enjoyed the treat without sharing.  And then there is Kobie who will catch, kill and eat any critter that is unfortunate enough to come through the fence.  I call her my hunter.  I’ve always said she could live in the wild but now with her pancreatic insufficiency there would be no one to put enzymes on her catches. Teddy didn’t seem to be interested in any part of critters outside and Olivia…  well do princesses really catch and eat their own food?  I think not.  So now it’s Brita and Jake who love to bury things (see previous post) so my guess is that would bury it.

So back to the current situation…  no go..  they were ignoring it as if it wasn’t there..  I decided to go into avoidance and just go to bed and hope it magically would be gone in the morning.  It wasn’t.  So, I called on the dog that was a sure thing…  Kobie.  As she trotted down the stairs she did a double take when she almost passed by “it”. Then she turned, grabbed it and ran outside.  I never saw the squirrel again and prefer to believe that she buried it….  however…  I’ve never seen Kobie bury anything!

Another friend asked if I took a picture… duh..  never gave it a thought.  I guess I’ll just have to put a picture of Kobie here.  I should have called this post “Kobie to the rescue!” 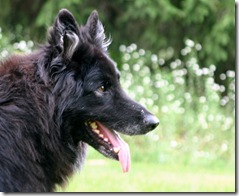 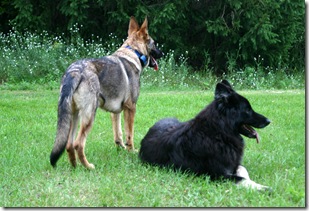 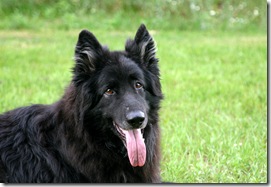 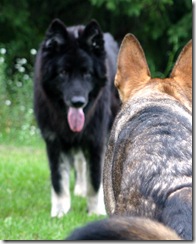 It had been 3 years since I was away overnight.  I made the commitment to stick around with Ari since he (1) because of his Addison’s disease wasn’t supposed to be in stressful situations and (2) because of his seizures and brain tumor couldn’t find his way back into the house at night.  As a result Miss Brita had not seen the inside of a motel much less stayed in one. 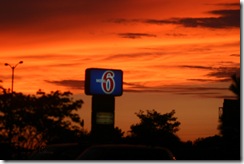 We arrived in St. Louis after a 9 hour drive filled with construction and traffic and got to the motel.  It was a Motel 6 and. in my experience, any Motel 6 I’ve stayed at had a door from the room straight to the outside so you could park right outside of your room.  This one was different.  It formerly had been a Holiday Inn they told me so to get to the room, we had to come inside the front entrance and go down a hallway.  hhhhmmmm….

Recently, I purchased a leash with a coupler but had only worked with the dogs on it once so I thought here is a test.  I was saying a silent prayer as I went in the door with 2 exuberant GSDs who had been crated all day that the people with the 3 little whatever-they-were dogs wouldn’t come out of a room or around a corner and surprise us. I told the people at the desk that if my dogs barked for any reason as we were coming in, that I had them under complete control and would immediately reprimand them but because there were German Shepherds that initially it may be loud.

I am happy to report that they were extremely well behaved, sat as I asked prior to entering a door and before being petted. I was very proud.  Jake followed Brita’s lead so when I told them to “sit” and she did, he looked at her and did just that.  This was Friday night and all went well in and out.  Saturday I found a back door but there was an elevator ride down a floor to get out.  Jake took it in stride and Brita, well lets just say she wasn’t terribly fond of the feeling that the floor was dropping out from under her, even though as a puppy I introduced her to elevators and Jake I had not.

Saturday after the trial, we came back to the room and I decided to just stay in.  The heat index was 103 and I was happy to not have to go out in it.  As I was sorting through some photos on my computer the two of them started rolling around and playing on the bed and it was then that I took these pictures.  I had recently gotten a pocket camera and was testing it out and it also had a video recorder so I used that also.  The video below is 6 minutes of them playing and as I’m watching it after I’m done I’m thinking…  yet another video that only a MOM would watch through to the end!!  All in all…  they made me proud!!

St. Louis PSA trial in July 2010 was the closest trial to me so far this season - a mere 8 hour drive that took 9 hours with construction and traffic. The photos that I took are of the 1's and 2's and what other people took of us.  Brita made me proud during the obedience and the protection went as I expected. She passed the car jacking but came off the bite in the handler attack. I wanted us to have some trial experience together and because there were some huge blips in training and no PSA decoys within a several hour drive, the result was only a handful of suit training opportunities over the last year. I now know what we have to work on and for us it's the journey not the destination! It's actually nice to have a dog that isn't thinking about biting during obedience! :)

The trip to St. Louis was long and delayed with lots of construction and traffic.  We did stop at a few rest stops and took some pictures. When we arrived, after checking in at the hotel, I went to the trial field for the open practice and worked Brita who did fine on the decoy (Thomas Burlile).  After that we headed back to the motel enjoying a beautiful sunset!
(We = me and the dogs!)