It's been 3 years since that cold, snowy February Saturday when Teddy said: "It's time"...www.teddyedwardgsd.blogspot.com ...where DOES the time go anyway???


By: Laurel Stone
Email ThisBlogThis!Share to TwitterShare to FacebookShare to Pinterest
Labels: Teddy 1999-2009

Often I have a picture that reminds me of a picture of another dog I took in the past so I started doing posts called Name that Dog.  When it went up to three I decided that the series needed a link on the sidebar!
There will be more, I’m sure.  None of the pictures were taken with the intention of having them look like another picture…  it just happened!!

This is from the first one and what started it all.  Jake on left, Ari on right.  None of the other dogs have even stood like that.  Obvious difference in coloring and head shape but it’s the position I was looking at.  Jake is young…  maybe a year old and Ari is 8 years old. 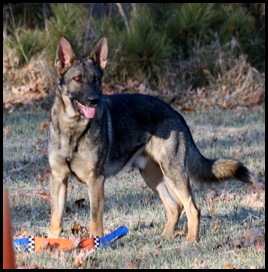 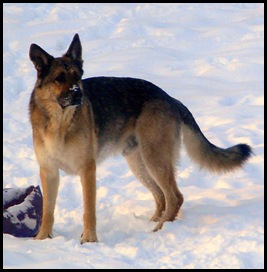 Oldies but goodies! (Brita annoying Teddy and Ari on the Fence Line)

So I came across some oldies but goodies. I was telling someone recently how Ari used to chase the UPS truck and school bus and run back and forth until it was gone. The girls... Olivia with the cone and Kobie the black dog typically just do as they were doing and watch and wonder "WHY" I'm sure!  This video, by the way, was 2 months after Ari almost died during an Addisonian Crisis.  He has lost his coloring and his shape but not his attitude...

When Brita was a puppy I said.. "Teddy, here's a puppy for you.. raise her up good!" And what he put up with! It was however, the only dog I ever saw him really play with. Brita was like that... even today... she would make him comfortable and encourage play. It was wonderful that Teddy go to have that relationship as he aged..

Jake and Brita
I love the relaxed open mouth shots!  ... and especially when I catch it on camera! 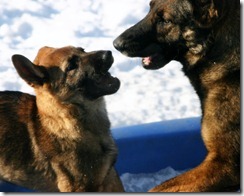 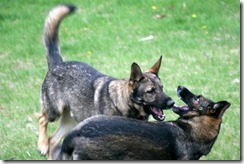 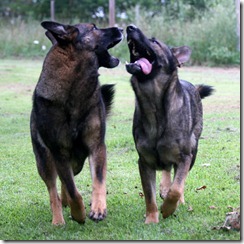 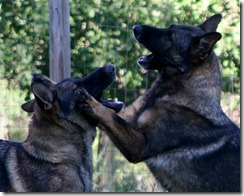 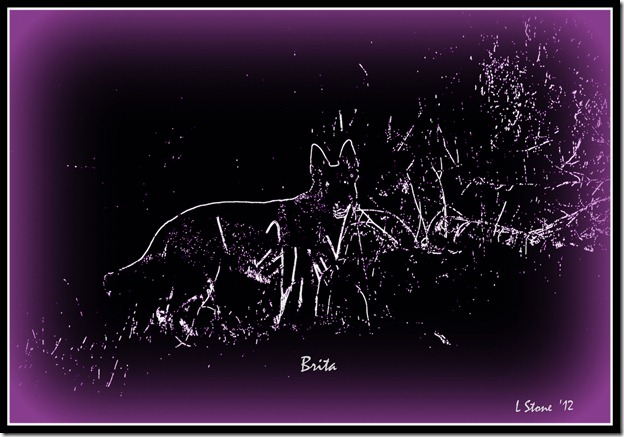 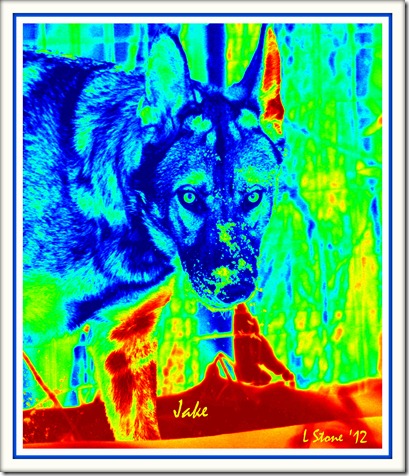 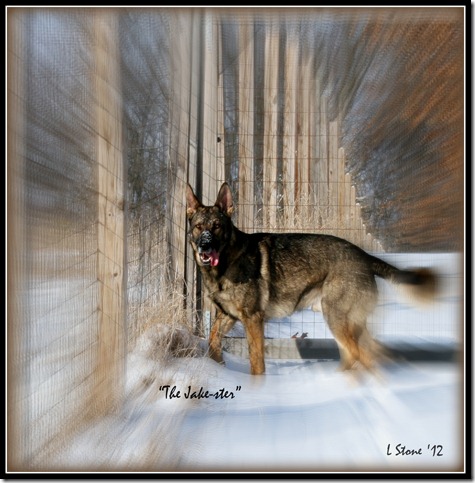 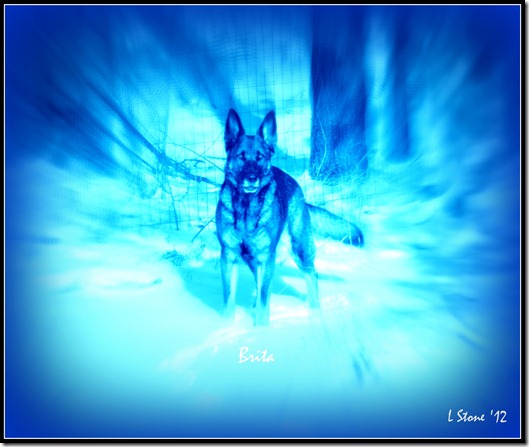 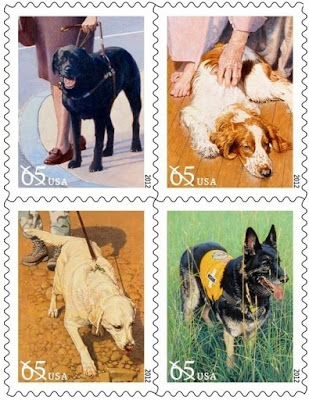 Service Dogs honored by US Postal Service - This is so cool I had to share it... a new stamp series from the US Post Office!

MERRIFIELD, VA — The U.S. Postal Service celebrates the enduring partnership between dogs and people with the issuance of the 65-cent Dogs at Work set of four stamps.

“We are proud to commemorate these specialized dogs on stamps,” said U.S. Postal Inspection Service Homeland Security Coordinator Michael T. Butler in dedicating the stamps. “These animals are critical to serving individuals with special needs and critical to enabling successful rescues.”

“We are honored the Postal Service is paying tribute to these animals that work tirelessly to perform their missions of mercy,” said MacPherson. Task Force 1 has performed more than 60 rescues throughout Central, South and North America, Europe, the Middle East and Asia.

Artist John M. Thompson of Syracuse, NY, created original paintings for each stamp in acrylics, based on photographs that he composed. The guide dog depicted is a black Labrador retriever, the tracking dog is a yellow Labrador retriever, the therapy dog is a Welsh springer spaniel, and the search and rescue dog is a German shepherd. Art director Howard E. Paine of Delaplane, VA, designed the stamps.

For thousands of years, dogs and humans have shared a special bond. And from the beginning, dogs have been more than just companions and friends — they’ve been vital partners, working side by side with people. While the earliest dogs helped human hunters bring home prey, today’s pooches excel at a variety of jobs, from herding sheep to assisting deaf people to starring in movies.

Guiding
Some 10,000 people in the U.S. and Canada rely on dogs to “see” the world for them. While the idea of using dogs to guide people who are blind is centuries old, it wasn’t until 1916 that the first organized school for guide dogs was established in Germany. The first canine graduates went on to aid veterans blinded in World War I, and the concept spread around the globe. Guide dogs navigate around obstacles, alert their handlers to curbs and stairs, and even learn to disobey any command that would put their handlers in danger. Along the way, they enrich and empower countless lives. Typical guide dog breeds include Labrador retrievers, golden retrievers, and German shepherds.

Comforting
Sometimes the best medicine can come in the form of a furry friend. Therapy dogs, chosen for their friendly dispositions, bring comfort to disaster victims, abused children, the elderly and the ill. Frequent visitors to nursing homes and hospitals, these dogs seem to improve the health and morale of patients just by lending a paw or offering a head to be scratched. Some therapy dogs even make house calls, visiting people who are homebound. An affectionate dog of any breed can become a therapy dog, and there aren’t many requirements — just knowing simple commands and being well behaved around all kinds of people.

Tracking
Tracking is just one of the jobs that war dogs are trained for. Loyal canines have fought at the side of U.S. soldiers for more than a century as scouts and sentries. Today, military dogs excel at sniffing out explosive devices. They also protect their handlers at all times. Besides serving as war dogs, tracking dogs work with police and security personnel. They can be trained to detect drugs, guns or explosives and to track people. Several different breeds are often chosen as tracking and sniffing dogs. While airport beagles commonly detect contraband fruit arriving from overseas, German shepherds, Dutch shepherds and Belgian Malinois are preferred by police departments and the military.

Searching
When racing against the clock, a search and rescue team’s greatest asset can be a well-trained canine. A dog’s superb sense of smell can speed up a search effort, increasing the odds of survival for lost people and disaster victims. Search and rescue dogs can locate children lost in the woods, sniff out survivors of an earthquake and even dig out people buried in an avalanche. Depending on their training, dogs can track human scents in the air or on the ground. Many different breeds make excellent search and rescue dogs, including bloodhounds, border collies, German shepherds, Labrador retrievers and golden retrievers.