Obedience (83 of 100)
Ari wouldn't work for me (the mom) so, even though I trained him,
Greg handled him at the last minute and almost titled him that day!
83 of 100 obedience without the long down. When put in a down I know
Ari thought he was supposed to follow Greg so he got up and did.

The Attack on Handler (37 of 50)
This is where we should have asked for a sleeve because
Ari had only been on the suit for 6 months.


The Courage Test (54.5 of 70)
Since Ari was a crossover dog from Schutzhund, we asked for the sleeve
and took the 5 point deduction. In PSA1 this is not allowed today.

Ari missed the attack on the handler by 1 point and you needed
to pass all three scenarios. In 2005, there were 3 protection
scenarios for PSA1 and now there is an additional one
which is a scenario chosen from 1 of 5 published.


Email ThisBlogThis!Share to TwitterShare to FacebookShare to Pinterest
Labels: Ari 1999-2009 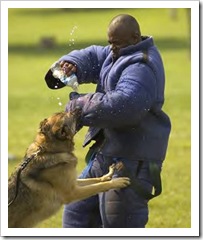 Greg took Ari, never having handled him, out on for the routine.   He has just blown me off for the PDC and this was the PSA 1 which was harder.  They got an 83 I think but lost 5 points because on the down Ari thought that he was to go with Greg so he did.  The next day he got 88.


When they pass obedience 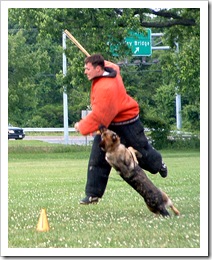 In the first protection scenario, the team has to heel to the vehicle and then a wide collar is put on the dog.  They get in the vehicle and a guy comes up, talks, the dog is fired up and then there is the attack with gunshots.  The dog is to fight, the guy freezes, the dog outs and guards.  You get 3 times to out but the handler says it once and waits until the judge says out again.  I lost a point in NY because I said out twice and wouldn’t have needed to. 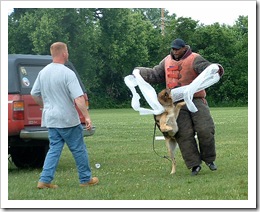 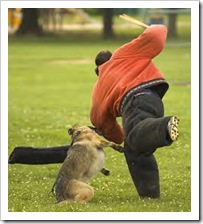 worked on all this stuff with Mark Keating) jugs of rocks, an air horn and at the last trial, the decoy charged through 16 cardboard boxes (4 wide/4 high) before the dog saw him.  Only one dog passed that day.

The 3rd scenario is the courage test and a suitcase type item is thrown at the dog to fend them off.  Here he asked for the arm presentation.

With every scenario and the obedience there is an evaluation.  Overall this day Ari scored 82% which is very good but since he missed the one scenario by a point he didn’t title.

NOW if he will just do it for me! 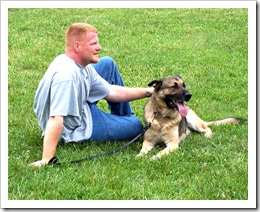