It’s been an interesting 2 weeks.  It’s been years since I’ve been as sick as I was these last 2 weeks with a cough that’s going around.   I had a class start on Tuesday and could barely talk!   It was tough but the studen 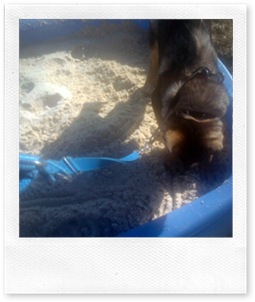 ts helped out by reading aloud paragraphs for me.

Jake is amazing and the hardest thing is to keep him from doing more than he should.  “Walk” means all 4 paws are being used and there is no hopping (which he likes to do).  It’s hard to have him meet people because he gets so excited and tries to jump.  I’ve walked him numerous times daily and now try to do it where there is not so much excitement.

TODAY, I discovered that walking in my back yard may be the best because there is no one around as long as I keep the other dogs inside.  AND I realized today that Jake had really never seen ground and woods other than snow covered.  We walked along Ari’s trail 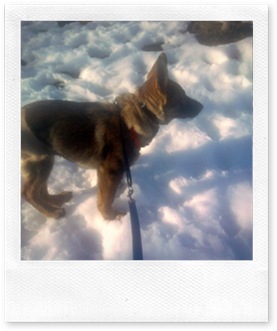 s and it was like he had a hard time taking it all in.  He picked up twigs and branches along the way and dug just a little in the sandbox.  When we got to the rise in the woods, he stood there with a very self confident pose, looked down the hill where one can see for miles and then looked back at me as if to say “This is all mine now, isn’t it!”  And. of course, he is right!

It will be a blast when the grass is green since he has never seen that either!!

These photos were taken today with my phone…  leash in one hand, treats in another, phone in another..  oh wait..  that’s too many.. it was a juggling act!