(update 2013 – I’m back at it with Winnie, my neighbors Bernese Mountain Dog!

It was with sadness today that I made the decision to not renew my membership with Therapy Dogs, Inc.. an organization that I have been associated with since 1992. 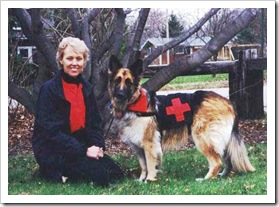 away from me) but on leash in a hospital or nursing home setting she was amazing.  We were one of the original teams at Theda Clark Regional Medical Center in Neenah in 1992 and she continued to be a part of that program until 2003.  During her life we visited an assisted living home weekly in Winneconne where she brought many smiles to the residents.  In the mid 90’s after an evacuation of a small town in the area for three weeks, it became apparent to me that a therapy dog in a Red Cross shelter would be very beneficial to people who were displaced from their homes for a period of time.  I approached the local Red Cross 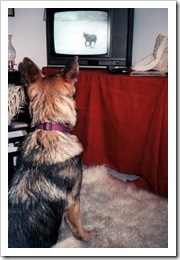 and worked in conjunction with them to start a program that was utilized in several local evacuations.   We were highlighted on the cover of the Therapy Dogs, Inc. magazine with the photo that’s here and as a result I received several call from handlers in different cities across the country asking for advice on how to implement such a program.  Another thing we did which Josephine really liked was to give talks to community groups about therapy dogs.  She would jump onto a table if one was available and like a princess watch the group and her ears would perk up every time I would say words like “visit” and “hospital”.   Josephine’s number with Therapy Dogs was #25 and I believe when she was approved, the numbers were in order and as you’ll read, that number was handed down for two generations of dogs.

When Josephine was 8 years old, Ari (1999-2009) came into our lives and at a year old, he was evaluated and approved as a therapy dog.  I remember how he would roll over on the floor in the hospital halls to let small children rub his belly.  It became apparent that his strong point was not therapy dog work but rather he was headed towards competition.  Note here how he is watching carefully a dog training video! 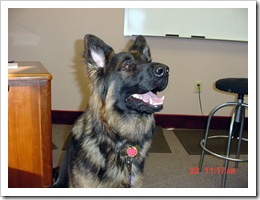 Because I still had Josephine, I decided to not use Ari as a therapy dog and focus on his training.

In 2001, Teddy (1999-2009)  came into our lives.  He was the same age as Ari and was 14 months old at the time.  Teddy had issues with separation anxiety and fear of loud noises outside such as machinery but he became my best therapy dog yet. He became my class companion and when teaching, he would be in the room with me and the students.  For a few years I was an evaluator of new therapy dog teams for Therapy Dog, Inc. and also 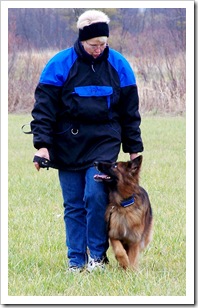 a Canine Good Citizen evaluator and Teddy was my “neutral” dog who was not flustered or aggressive when another dog was around.  I trusted him 100% – he was the best!  I had to retire him in 2008 because he started having problems getting around and it was obvious that his career was over.

Later in 2001, Olivia arrived from a German Shepherd rescue.  Her father was Teddy’s grandfather and knowing and loving Teddy’s personality the way I did, when I heard about Olivia, there was no decision as to whether or not she would come to live with us.  Olivia was evaluated and registered as a therapy dog in 2003 and took over Josephine’s #25.  However, Olivia’s personality was not even close to Teddy’s.  While she was sweet as sweet could be, she was hyper and nervous and her calling was with Ari and obedience competition where s 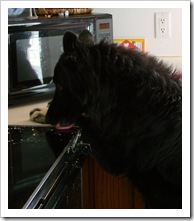 he channeled that nervousness into a high stepping beautiful picture.  She is 11.5 years old now.

Kobie was next to join us in 2003 at slightly over a year old.  She was also registered as a therapy dog and would go to the hospital on visits.  Kobie was soon diagnosed with pancreatic insufficiency and I choose to not  risk “accidents” on visits so her visitations were limited and eventually stopped altogether. Kobie’s mission I believe in her mind was to help around the house cleaning up any food that I may have dropped or she may have found.  Note the cleaning of the stove in the photo.  I’ve called Kobie my angel, the peacemaker around the house. She was the one who my mother in a nursing home was most anxious to see because she was a black 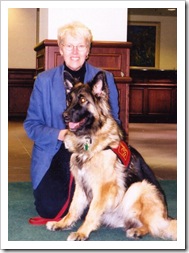 dog and that color was her favorite.  She is 9 years old now.

And then there was Tori… sometimes mistaken for Josephine by people who didn’t know I lost her.  In late December 2003, she came to live with us from another German Shepherd rescue and, even though she was only a year old, she qualified to be registered within a few months.  She was nothing short of amazing with people. I remember how she would walk into a room and go from one person to the next and look at them as if to say, I’m here to help.  Little did I know then that two years later she would be a Psychiatric Service Dog for a woman who suffered from PTSD.  Her time with me, I truly believe, was to prepare her for her real purpose of helping someone who was not able to help themselves. 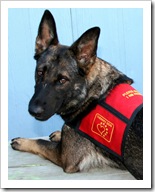 Enter Brita at 14 weeks old – 2007.  I gave her to Teddy to raise and teach her dog ways and he did a fine job. Shortly after she was a year old she was registered as a therapy dog and took over Olivia’s number, #25 which she kept until recently when computers created new numbers for each dog each year.  At this time, Teddy retired and Brita was “it”, the only one left - young pup in a pack of aging seniors, she was the next generation.  But Brita was a workin’ dog, a German shepherd from West German lines and she wanted to WORK!  Visits became fewer and fewer as Brita collected titles… Rally Excellent, Herding Test (HT), Schutzhund BH, AD, RH and WH, TR1, SDA T1….all before she was 2 years old.

So today, Dec. 30th with one day to spare, I made the decision to put that work behind and continue forward to other things.  Brita’s brother, Jake, is here now and at one year old would make a wonderful therapy dog and, who knows, maybe someday we will do that.  For now and in the future.. it’s other work… it’s training, it’s competition…

I’d like close by sharing a story of one of Josephine’s visits to the group home.  As usual, we were making the rounds in the living area and, as usual, came to Esther who was sitting hunched over in her chair.  Each visit I would take her hand and pet Josephine with it and each time there was no response. Then one day, she turned her hanging head to the side and said, clear as a bell, “What’s her name”?  “Josephine”, I replied, “can you say that”?  She replied, again as clear as a bell, “Josephine”.   Then she added: “She LIKES me”.  The staff couldn’t believe what they were hearing because some of them had never heard her speak.  We don’t know what people in that situation hear and comprehend but that day gave me a glimpse into what a difference a therapy dog visit can make to a woman who no one thought knew what was happening.  That’s why I was a part of the world of therapy dogs. 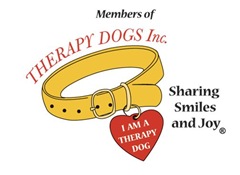