Dogs: Past and Present

Someone commented to me recently that they thought Josephine was my first dog.  I explained that she was the first dog I trained in obedience.  She IS the dog who made me a trainer because she tried to take over my life and I HAD to train her.  Yes…  that is a picture of Josephine on the roof of the garage…  Must have been a great view from there! 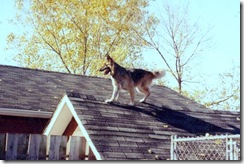 There were, however, other dogs in my life.

First was a cocker spaniel when I was born..a black one I’m told and saw photos of… I don’t remember that far back.  His name was Pando and I found out not that long ago that it was short for pandemonium!

As I was growing up we had 2 beagle mixes from the local SPCA.  Everything was called a beagle mix if they were medium size dogs with floppy ears. I can’t imagine there were that many beagles back then.  Who knows what they were!

When I got married we acquired from the SPCA…you guessed it..  another beagle mix that we named Sandy for Sandy Koufax (no idea of spelling but my husband was into baseball)!  We had Sandy my best guess is 6 years or so until we moved to the outskirts of Hanover (PA).  Our house was on the road going out of town and cars tended to pick up speed.  Before we had a fence, Sandy got away and was hit by a car.

Off to the SPCA we went to get another beagle mix and named her Myrtle (the girls did that… they were about 6 and 7 at the time).  Some time later.. (actual years are fuzzy – I’ll have to look through the photo albums some day) I wanted a German Shepherd.  Why..  who knows why we like the dogs we like but off to the shelter we went and I brought home a “German Shepherd” mix which actually turned out to be a beagle mix with floppy ears and never got any bigger than 30 pounds.  I obviously didn’t know anything about dogs back then.  Anyway, that little girl was the first Josephine whose life also was cut short by the highway.  Thank goodness, it was the last one also.  Neither suffered so that was a blessing but a hard thing to take for a family.

I came home one day from work and there 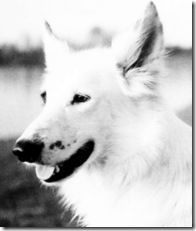 was a white with some black markings, 50 pound or so dog that looked a German Shepherd mix.  He was curled up on a chair on the porch so I asked the girls who were about 10 and 11 where he came from… they had no clue. There were hills behind our property and our best guess is that he was dropped off there.  He was young – 9 months or so, extremely friendly, most likely had been tied out from the lack of hair on his neck and was afraid of newspapers..  We could only speculate about that… Finally, I had a German shepherd or at least a dog that was close to one in my mind.  We named him Jake.  Jake lived for 14 years and helped to raise the girls!

Sometime after we found a terrier mix on the streets of Hagerstown MD that we named Starsky.  Starsky was a cute little dog but would scale the fence to go across the road to the neighbors for treats.  We decided it was in Starsky’s best interest to live somewhere else in a more confined area so we found a great home where she wa 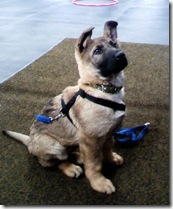 s renamed Sara and lived about 19 years I heard.

So, then in Wisconsin, there was Josephine, Ari, Teddy, Olivia, Kobie, Tori, and Brita.  Eventually, I only had Olivia, Kobie and Brita but then, out of the blue, I got a call about a puppy.. a male..  Brita’s half brother..  the “J” litter.  The first thing I said..